The PhilHealth basketball players with the fans

Before the game, Aldave was asked about the preparations made by the perennial champs. We practiced every other day for a week leading to this [championship game]. Pinaghandaan namin ito lalo na iyong stamina namin kasi iyon ang kulang sa amin. He also mentioned that the group cautioned against overconfidence despite being undefeated during the elimination round. We need to go all out from the get-go, hindi namin kailangang maging sobrang kumpiyansa until the final buzzer.

The game was close after the first canto with PhilHealth trailing SSS by three points, 17-20. In the second quarter, PhilHealth tightened its defense anchored by the bruising duo of Noriega and Randy Pagon. Aldave and Kenneth Emata collaborated for three triples in the period to turn the tides and Pacheco scrapped for seven points to give PhilHealth a nine-point lead, 43-34, into the break.

PhilHealth outscored SSS in the third salvo, 22-18, with Aldave, Noriega, and Pagon combining for 15 points. SSS tried mightily to salvage the game in the final quarter but failed due to the 12-point explosion of Aldave which was aided by the brilliant play of Mazo who tallied seven points down the stretch.

The game was tightly contested until the early part of the fourth quarter when PhilHealth held a 54-50 advantage. However, the game went south for the social health insurers when Alfeche was called for an offensive foul nullifying the basket that could have pushed the lead to six. It was then that PAGCOR took control of the game and held PhilHealth at bay.

Dr. Roy B. Ferrer, Acting President and Chief Executive Officer of PhilHealth, praised the PhilHealth basketball teams and said, Thank you for being our constant source of pride these past few years. Congratulations on winning yet another overall championship in the GCAA Basketball Tournament. Know that we follow your success with great admiration and it serves as a reminder that we are capable of achieving great things through hard work, unity, and perseverance. (END) (JJ Rico) 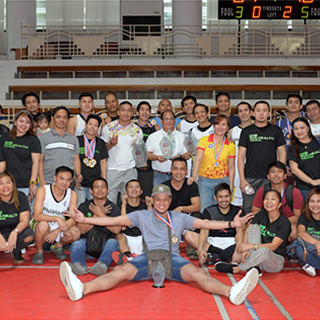