NOT THE torrential rains and flooded streets brought about by Typhoon Inday, and not even a high-level morning meeting in Manila can stop PhilHealths Acting Chief himself from attending an Alaga Ka event in the historic city of Valenzuela on Friday, July 20.

Donning the popular green PhilHealth jacket on a windy and gloomy afternoon, APCEO Dr. Roy B. Ferrer graced his first Alaga Ka since he assumed the reigns of the state health insurance agency in June of this year.

Addressing the 221 beneficiaries present during the event, Ferrer explained that the expression Alaga Ka is short for alamin at gamitin (to know and to experience), and went on to impress upon their consciousness the importance of being knowledgeable of their rights and entitlements to maximize them when a medical situation comes up in their midst.

The event is the seventh to be held in Valenzuela for 2018, he said, recognizing the abiding partnership where providing city folks with access to quality health care through social health insurance is concerned.

The beneficiaries in attendance, most of whom are indigent and sponsored members, were assisted in updating their membership profiles with PhilHealth, and afterwards given their Member Data Records and IDs which they can readily use if the need arises.

Among them is Ederlyn R. Casuco, a young mother of three and a resident of Lingahan in the district of Malanday, who also shared her experience when she gave birth to her third child John Philip at a government facility in Karuhatan in March this year.

Casuco is married to Ricardo, 30, who works as a construction worker. He was the one interviewed by the hospital staff shortly after her admission.

She recalled that they did not pay anything for the entire hospital stay because of the No Balance Billing policy of PhilHealth. Nagpatali na rin ako para hindi na madagdagan ang anak ko she proudly added. She was referring to the tubal ligation service that she also availed of and paid for too by the state health insurer.

Hers is among the countless of cases that demonstrate how enduring partnership between stakeholders in the health sector can bring about positive results in peoples lives. 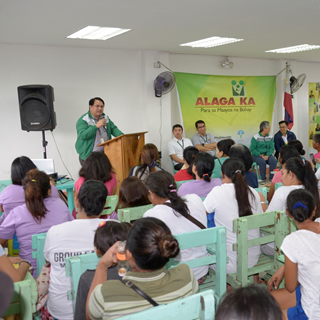