IN order to forge a stronger relationship with the countrys Local Chief Executives, the Philippine Health Insurance Corporation (PhilHealth) is set to hold a Governors Forum on May 30, 2018 at The Blue Leaf in Libis, Quezon City. The event is part of the continuing celebration of the Corporations 23rd Anniversary which kicked off on February 14 of this year where the actual signing of its charter happened 23 years ago.

This forum intends to promote the various PhilHealth programs and initiatives through strong partnership for the betterment of the countrys health care system that will benefit not only the 97 million strong beneficiaries but the entire Filipino citizenry as well.

The forum will be attended by the Secretary of Health and PhilHealth Board Chairperson, Dr. Francisco T. Duque III; officials of the League of Provinces of the Philippines led by LPP President Governor Ryan Luis Singson; provincial health officers, members of the PhilHealth Board of Directors; and Regional Vice Presidents. President Rodrigo Roa Duterte has been invited to grace and keynote the activity.

Among the major programs of PhilHealth that will be showcased in the forum are the No Balance Billing (NBB) Policy, the Point of Service (POS), and the Electronic Claims (e-claims). It will also highlight initiatives at improving performance which include its ISO Certification and its widely-recognized compliance to Anti Red Tape Act (ARTA) by all its offices.

Select local executives will also provide testimonies on how their respective localities have implemented PhilHealth programs effectively. Hence, members from their ranks are expected to learn, draw inspiration and push for possible adoption of strategies, all towards the achievement of Universal Health Coverage.

A press conference will also be held to give members of media the chance to ask more about the various programs and collaborative efforts between PhilHealth and the local government units where implementation of the National Health Insurance Program is concerned. Duque, Singson, and PhilHealth Interim/OIC President and CEO Dr. Celestina Ma. Jude P. De La Serna will serve as panelists.

Under the Revised Implementing Rules and Regulations of R. A. 10606, the Program shall be compulsory in all provinces, cities and municipalities nationwide, notwithstanding the existence of LGU-based health insurance programs. (END) (Servillano G. Medina) 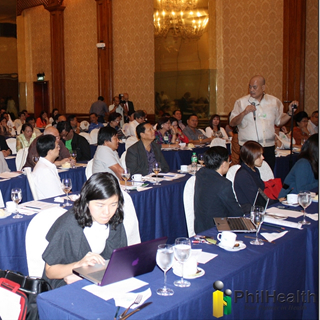