PASAY CITY  The Philippine Health Insurance Corporation (PhilHealth) Shooting Team guns for its third straight championship in the 2018 Government Corporations Athletic Association (GCAA) Shoot Fest here at the Philippine Armed Forces Gun Club, Inc. (PAFGCI) in Villamor Air Base. Another triumphant defense of the crown will secure the team a spot in the record books for successfully completing a three-peat.

I wish the PhilHealth Shooting Team all the best. The PhilHealth community is behind you and believes that you will make us proud by bringing home the championship for the third straight year, said PhilHealth Interim/Officer-in-Charge President and CEO Dr. Celestina Ma. Jude P. de la Serna.

The shoot fest features five (5) stages of short and long firing courses and three (3) categories: Classic, Production, and Standard. The categories are determined primarily on the configuration of a competitors firearm.

Team PhilHealth parades a cast of 18 shooters from its Head and Regional Offices led by Head Coach and Team Captain Filbert Sollesta of PhilHealth Regional Office (PRO) XI. In this years competition, the team is joined by a lone female shooter.

Princess Marie Dequito of Local Health Insurance Office (LHIO) San Pablo in Region IV-A takes part in the tourney for the first time; she competes in the Classic Category and will be shooting with 15 other lady participants. She admits to feeling the pressure as a rookie but is also confident that she can bring her A-game to contend with the best.

I feel a lot of pressure because look at them [teammates], theyre men and I cannot move like them, observes Dequito, but adds that, I had a lot of help from my teammates. They showed me the proper handling [of the gun] and other essentials to effective shooting.

Despite missing a number of veteran shooters who helped the team win its past two championships, Team PhilHealth still has a solid core and talented additions that will give the other squads a run for their money.

The 2018 GCAA Shoot Fest promises to be exciting, fun, and competitive as the hopefuls take their best shot at bagging individual and team accolades. (END) (by JJ Rico) 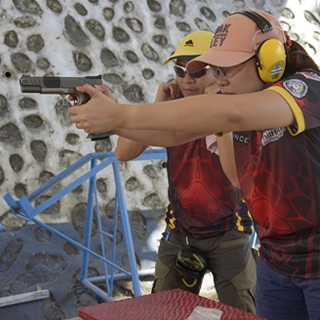